a to z Logo

Amazon Founder: Jeff Bezos is the founder, president, chief executive officer (CEO), and chairman of the board of Amazon.com.

Jeff Bezos, a computer science graduate from Princeton University, came up with the business plan of Amazon.com while making a cross-country drive from New York to Seattle in 1994.  He wanted the name of the enterprise to start with an ‘A’ so that it’d appear early in alphabetical order. He looked in the dictionary and settled on ‘Amazon’ as he found it to be an “exotic and different place” and being the longest river, hoped that the company would grow to replicate the same in the world of online shopping.  The site went online in 1995.

Evolution of the Amazon.com Logo

Amazon.com a to z Logo

Amazon Logo: The logo of Amazon.com has an arrow going from ‘a’ to ‘z’, to represent the fact that their catalogue includes product starting from all letters of the alphabet. The arrow also forms a smile to indicate customer satisfaction.

–          One of the major complaints of the stockholders of the company was that, it was very slow in showing profits.

–          A glitch in Amazon.com’s programming allowed writers to criticize their own works favorably on the site.

–          Amazon acquired IMDb, the online database of Movies, Television shows, Videogames, Actors, Characters  and other personnel associated to the world of cinema and television for in 1998 and Alexa Internet, the browsing behavior study and internet ranking website in 1999.

–          The first book sold on Amazon.com was  Douglas Hofstadter’s Fluid Concepts and Creative Analogies: Computer Models of the Fundamental Mechanisms of Thought in 1996.

–          The Time Magazine named Jeff Bezos as the ‘Man of the Year’ in 1999 for his company’s success in popularizing online shopping. 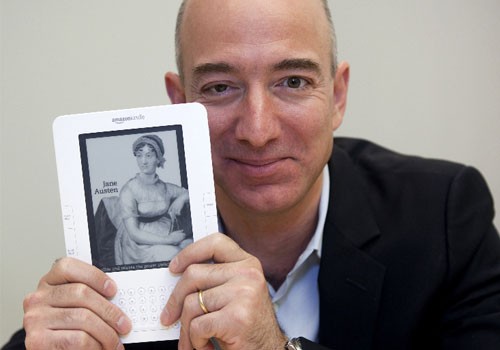 Jeff Bezos, the founder and CEO of Amazon with the Amazon Kindle.

–          Sachin Bansal and Binny Bansal were both employees of Amazon before they started flipkart.com.